What You Should Know About Project Management at Sign Effectz

We’d like to thank Jeff Wooten, Editor, Sign Builder Illustrated, for interviewing Adam Brown recently on the subject of sign shop project management. We’re also grateful to Jeff for giving us the green light to share highlights of the conversation here on our blog. Read on to learn how your sign project is in good hands here at Sign Effectz.

Whether you’re working on projects that require multiple components or a lengthy amount of fabrication time (weeks or months instead of days), scheduling and workflow management are critical components to making sure that all parties will be happy with the timetable and the end-results.

“You’ve got to first segment the design, manufacturing, and install processes and then separate them into even more detail,” he explains about planning a work schedule. “Once you break it down into the steps for each one of those categories that you can get your head around, you can then start assigning the work that needs to be done for each one of them.

Brown leads a collective group of artists, designers, metal fabricators, engineers, installers, and more at Sign Effectz to create visually effective and physically durable custom signage in a timely manner. One way he is able to achieve this is with proper scheduling and project delineation.

It’s all about putting together reasonable timelines. While Brown says these practices can be employed on a spreadsheet or a simple piece of paper, he does lean toward advising consideration of the free software programs that are available. These are easily modifiable and shareable.

For example, Brown uses Gantt Report to draft and chart working schedules line by line. These lines range from customer interaction to design to fabrication to installation to final payment. He also always takes into account the surveying process, permitting, billing, calculations, and customer interaction.

You have to be analytical and detailed when putting together a work schedule. According to Brown, the best way is to work backward. “Start with the installation and then plug in how many people you estimate you’re going to need for this portion of the project. Then move to production, planning, and surveying,” he says.

After coming up with a color-coded rough draft of the Gantt Report, he conducts his first weekly roundtable meeting with his team members that are going to be involved on the project (engineering/production drawings, material acquisitions, estimating, fabrication, installation, etc.). Brown breaks down the hours and puts them in as separate lines under the appropriate category. His team will let him know if he’s scheduled too many hours on one focus and too few for another. “A roundtable meeting gives them the opportunity to bring up what they see and notice and what parts of their job that I may not be intimate with that they have the opportunity to insert into other pieces into the schedule,” he says.

Comparing this process to working out or going on a diet, Brown says that these meeting are about persistence and staying on top of them. “This is our standard meeting every week until this project is done. We add it to our calendars—say every Wednesday at eight o’clock, for example,” he says. “At a bare minimum, you’re getting updates. The behavior of having it, even if it’s just for five minutes, brings that information back to the front of everybody’s minds which allows for less opportunity for mistakes.”

This type of tab project scheduling chart generated by the Gantt Report is ideal at his shop. Brown can see that he cannot start one task until the next one is complete. “There are other tasks that can run parallel,” he says. “I can cut and route material at the same time, which is why they are parallel to each other, but I can’t do anything until the production drawings are done.”

A lot of sign shop management teams can be overwhelmed these days by having to handle larger projects with fewer resources. “However the problem can shift from figuring out how to get it done to finding the resources to get a project done,” he says.

Brown states that it’s all about giving thought to the steps needed and applying a timeline to each one of them, making sure they’re in line with each other. “I can adjust hours accordingly to the job,” he says. “For example, if I add more bodies for a process, then I can shorten the hours needed for it.”

For a current hospital project his company is working on, Brown recognized that he needs to bring four more fabricators onboard (via Indeed.com) for five months straight. He intends on using them on the back end of the project. Until these new hires get up to speed, he plans to move over more veteran resources in their stead. Viewing his workflow chart allowed him to arrive at this solution before the project due date.

According to Brown, it’s important to remember that planning a schedule is always a “living, breathing thing,” and that no matter your best pre-planned efforts, changes or unforeseen events  (a sick employee, a structural element that doesn’t work and needs redesigning, a customer change to the design, etc.) are always going to happen.

Brown also has several other pieces of advice regarding large projects.

Be honest and keep clients informed. Brown also shares his Gantt Report schedule with his customers, sending it to them as a PDF file. For larger, longer projects, he’ll send this report out weekly to them. “They really love this kind of organization,” he says. “It spells everything out and shows them a timeline instead of just being a spreadsheet with dates on it. They can see the process.”

It’s important your customers understand any hiccups and hurdles with a project. “They have to understand the struggles you’re going through for them on their project,” says Brown. “The sooner you make them aware, the easier it is. It’s not about dropping a big bomb on them; it’s letting them in on some of the things you see coming up.”

Develop a relationship with your plan examiner. Don’t think for a second that any plan examiner jumps on your email about the great sign package you’ve put together as soon as it arrives in their inbox. Don’t sit back and wait for a response from them.

Communicate with third parties as soon as possible. As soon as you develop the process steps of a project, you’ll know which pieces require outsourcing.

“Excavation is a good one,” says Brown. “Talk to them early on about the project. Explain the concept to them and let them know it’s in the pipeline and ask for an estimate. If it’s in the Gantt Schedule and you review it once a week, you’ll know it’s coming up. The earlier you keep in contact with them and keep them informed, the more likely you are to have firm dates.”

Understand that obstacles are always going to happen. Brown says that bottlenecks and hurdles are just the nature of the beast, regardless of any best-laid plans. “If you have all your steps laid out, everybody is informed and you can come up with a solution much faster to get over the hurdle or improve the bottleneck,” says Brown.

Customer approvals could be one type of problem bottleneck, particularly when it comes to sticking to or adjusting production schedules. “Adding ‘approvals’ to the Gantt Chart starts urgency for the approval. They can see how their decision today is affecting the end date,” says Brown. “They expect you to build and install in this short period of time, but showing them a schedule like this demonstrates what you are doing for them and helps get approval from them.”

Material acquisition is another possible roadblock. “If our steel guy tells us that it’s going to take six weeks longer to receive our materials, I’ll adjust it on the schedule,” says Brown. “We can just move over to working on the aluminum.” 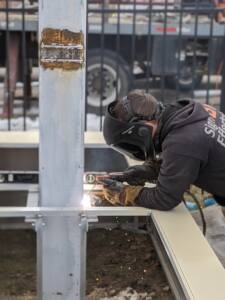 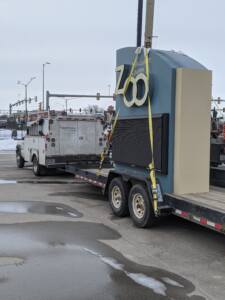