How to Build a Giant Goalie Mask 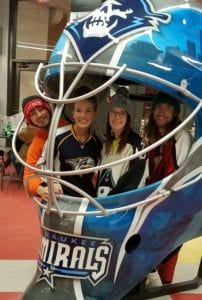 Adam Brown, the Milwaukee Admirals marketing staff and team owner Harris Turer, brainstormed on ways to build the hockey team’s brand among its fan base. Harris Turer wanted to engage with fans and reinforce the team’s brand. He decided they needed to design and build a giant goalie mask that not only embodied the team’s current brand and color scheme, but also paid homage to Milwaukee and to previous aspects of the Admirals brand, such as past logos. #MKEHockey

HOW IT WAS DESIGNED & BUILT

For Sign Effectz, production design started with 3D CAD modeling. A CAD model was developed to match a Bauer Goalie Mask and then sliced in a strategic fashion to develop cross section profiles to be machined on our Gerber Saber 408 router table. The initial step in the fabrication was to create the ½” plywood substructure.  The plywood was machined in-house and then stapled / screwed together to create a skeleton base structure.

The skeleton was then wrapped in polyethylene plastic sheeting, attached to the wood skeleton frame using a staple gun. The polyethylene sheeting material was selected because it serves well in releasing casting resins and foam once cured and is used in many different casting processes. Once wrapped, it was time for Adam to flip the piece over and pour fill it with the expanding urethane foam. This could have also been done in a spray on fashion, but would require an entire additional line of tooling to execute. According to Adam, “I wanted to add some strength to the piece without adding weight. It was important to me to not totally rely solely on the fiberglass shell for its structural strength. We would have had to add far more fiberglass and this would make the helmet heavy, fast”.

The material was purchased from Smooth-on and is called Foam-It. It’s a two-part expanding Urethane, available in varying density (from 2 to 20# density).  General rule is, the heavier the density, the stronger it will be, but the less it will expand. Two densities were used: A mid-level, 8# density for the areas that required structural stability and strength and a 4# density for ease of carving and filling in the gaps or voids that might not have filled completely by the 8#.

Once the foam was cured and set, the crew peeled off the polyethylene and started hand-carving it to match the plywood skeleton with hand tools. This allowed for rough shaping of all the compound curves. Once the rough shape was attained, the rest of the process was similar to laying out any fiberglass layup structure. A polyester resin and combination of both 4 oz and 6 oz fiberglass cloth was laid down. Between each of the 3 or 4 layers, it was sanded to get a smooth application surface for the next layer.

There are several resins to select from. A polyester resin was selected as one of the more versatile and economical options. It holds good Strength characteristics and is readily available.

Next, multiple layers of polyester resin mixed with various filler materials were used for additional sculpting base. Fillers are added to make it easier to sand and for application purposes.  The resin by itself, is runny like maple syrup. The fillers made it possible to squeegee and spread the resin like cake frosting.  The result was resin that stayed in vertical positions. Wood and talc powder fillers were used because they’re inert, not affecting the chemical curing process and very easy to sand.” 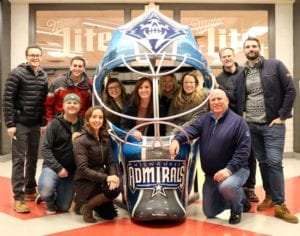 Once the shape of the mask was complete, a Matthews urethane basecoat primer was applied and spot putty was used to fill any small voids, imperfections or bubbles. Once completely wet sanded and super smooth a Grey Matthews urethane top coat was applied. This served as a base color for the airbrushed artwork.

The team also developed an aluminum supporting sub frame, which Adam refers to as the “mobility frame”. The aluminum tube frame allows the giant mask to be moved easily around the concourse of the arena on removable casters. There is a bin located in the chin area of the mask for storage of the casters when the mask is placed in its location. The frame was modeled & designed in CAD to ensure it would fit inside mask.

The mask was then shipped to Wenzel Design in the suburbs of Milwaukee for the air brush work, which took about 2 weeks. Local Artist, Chuck Wenzel designed and painted the artwork using House of Color Urethanes and various techniques to achieve the underwater effects, skylines and logos. The design included the team’s history through nostalgic logos and the Milwaukee skyline.

When it returned to the Sign Effectz shop, the air brushed artwork was masked off so the interior surface could be painted. Final painting steps included 4 coats of Matthews high gloss clear urethane.  Benches were also added to the interior of the mask for fans to sit during the photo opportunities.

A 1” diameter steel tube cage was roll formed and bent to enclose the front of the mask. This added some well needed detail to the mask and finished it off.

The Sign Effectz crew loaded the completed mask on a 8.5’ x 20’ car hauler trailer and shipped it to the UW Milwaukee Panther arena, located downtown Milwaukee, on December 21. Just in time for Christmas.

According to Milwaukee Admirals owner Harris Turer, “The new Admirals Goalie Mask from Sign Effectz is becoming an instant hit. It allows fans to take pictures and post them to their social media pages for all to see. We are excited for everyone who comes to a Milwaukee Admirals game to see the mask and take a picture in it.” #FanEngagement

We at Sign Effectz take great pride in achieving the behind the scenes engineering and development processes. This was a very challenging project from a form and function stand point. We’re happy to say, it’s a huge hit with fans as well as the team! Want a behind-the-scenes look, click here.