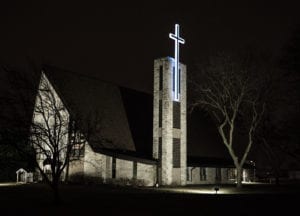 Letting the nearby community know of a worship space is an important responsibility.  When we got the call from Saint Paul Lutheran Church in Grafton, WI, we were honored.  The church leadership wanted to update the 32’ steel cross that is a signature element on their building.  The goal – make it more visible and aesthetically pleasing to the community by illuminating it.

Designed and installed in the late 1960’s on a limestone wall, the cross has served as a symbol of the church.  However, the time had come to revitalize it.  That required engineering, electrical work, research and craftmanship. Specifically, the cross would be illuminated on two side in order to leverage its height and maximize its visibility.  Although installation went smoothly and quickly, the entire project was about a year in the making. This blog post tells the story. 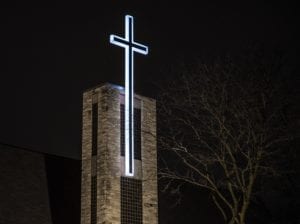 Our primary challenge was factoring in the double-sided aspect of the cross illumination, where the cross met the roofline of the building.  The roofline stands a little over 52 feet above the ground.

During the engineering phase of the project, variables such as the wind and weight of the cross had to be factored in. We added a custom formed polycarbonate piece to the outline of the cross and illuminated it to allow for visibility from front and back side.  Our team had a similar experience with this approach on a custom formed polycarbonate cross at New Horizon Church in Kewaskum, Wisconsin and St. Paul’s Lutheran Church in West Allis, Wisconsin.

Being required to mount on their existing tabs was challenging.  Building codes have changed dramatically since the 1960’s. The original cross was designed, engineered and installed in 1968.  Although the math remains the same, the code criteria has become far more stringent over the years, and rightfully so. Designing to meet the criteria while using a basic substructure, designed in 1968 had a few hurdles. It went back to the chalkboard several times until it met all the requirements?

Account Manager, Josh Brown poured over a number of different sets of drawings to find the necessary information.  He visited the local municipality’s offsite storage room to do his research.

Josh’s diligence paid off as he put all the pieces of the puzzle together.  According to Josh, “There were 12 different scrolls of drawings.  I found the originals which documented the existing cross. That enabled us to do a gap analysis between the original structural drawings that were from 1968 to where we needed to be for this project.”

Basic specs of this halo lit cross consist of:

It’s amazing what can be done with illumination! The increased visibility created by the halo effect around the cross is remarkable. Everyone is very happy with their newly revitalized / illuminated cross. It’s a beacon to folks that Saint Paul Church in Grafton, WI is there to serve their spiritual needs!